In my first year of practice, my now business partner Anthony Geraci said to me, “Nema, in ten years technology is going to make transactional attorney jobs obsolete. Legal Zoom has already started removing entry-level corporate work, and they are going to keep advancing and eventually put us all out of business.” At the time, I dismissed his assertion as an overly pessimistic futurist proclamation. Boy was I wrong.

I started practicing law in 2010. Like now, I was preparing loan documents. Back then, we had a form bank of documents that we would use when preparing a set of loan documents. There was a Word document for the Promissory Note, another for the Deed of Trust, etc. Clients would send us deal terms in an e-mail and I would get trained from a senior attorney about which documents we should use in the form bank based on the type of deal that was in front of me. In each loan folder there were usually 10-15 Word documents which together made up the loan. We worked with a handful of clients and typically charged about $600 for a set of business purpose loan documents. The process took about 3-5 business days, and everyone was okay with that.

Each year, we gained more and more clients, started hiring more attorneys, and tried to figure out ways to become a little faster at what we were doing. As is typical for a law firm, we would increase our billing rates, first to $775 for loan documents, then $800, then $1,000. Instead of multiple different Word documents, I put my law degree to great use and formatted a few different loan document sets which would cover different loan scenarios, including one set for a loan with a personal guaranty, another when there were two borrowers, etc. Better yet, I figured out how to use an Excel mail merge process where I could code various fields such as the borrower’s name and property addresses. I would complete the coded fields and then VOILA! Loan documents were 70% complete by the time I filled in the Excel sheet. We were not a law firm; we were becoming a tech company! Or so
I thought.

In 2014, I tried increasing our fee to prepare loan documents to $1,200 and for the first time started to see opposition from our clients. They were explaining to me that interest rates were going down, more market competition was present, and that borrowers were becoming fee sensitive. At the same time, we were growing as a law firm and in order to retain the top talent, we needed to increase the salaries we were paying our attorneys to prepare documents. I found myself in a bit of a pickle. Worse yet, we had hit a scale and size where we were handling so many transactions that attorneys were re-using old loan files to try to gain speed, but in the process, they were making mistakes by not clearing out old transactional data. Our clients were rightfully upset. No one wants to pay for an attorney who produces poor work product.

I didn’t know it then, but the World had changed, and we were in a fight for our survival.

During that time, our clients were primarily California mortgage funds who started calling me to let me know that they were planning on making loans outside of California to keep their interest rates up for their investors. They wanted our law firm to prepare loan documents with the help of local counsel to make sure that the documents were enforceable in each state in which they were lending. I was really stuck from an efficiency perspective. I had no way to keep a form bank of documents with all these states and making sure the documents were updated. We were constantly revising documents each time we entered a new market, and often updating them again when we re-entered a state based on a recommendation of outside counsel.

I was named partner at Geraci LLP in December 2015. At the time, there were six attorneys on my team, including me, and a new reality set in. ­­­­­­­­Clients demanded loan documents be produced cheaper, faster, and with no errors. There is an old saying that you can only ever get two of these three: Cheap, Fast, or Good. I was now tasked to produce all three, and if I couldn’t, we would no longer have jobs.

One of our clients requested to purchase a set of template loan documents from us. He asked if I could code them using a free online tool. I told him that I didn’t know what the tool was and could not help. Instead, I kept trying to figure out how to maximize using mail merge and other Excel based tools in order to try to reduce drafting time for loan documents.

The problem was that loans were becoming exceedingly complicated. Gone were the days when there was a single borrower, with a single principal, signing loan documents. We were dealing with complex entity structures, complex deal terms, multiple properties, and multiple states, making basic automation useless. Instead of being 70% complete by the time we were done with the Excel file, we were at best 25%. We were Good but not Cheap or Fast enough.

One Sunday I was playing catch up as I often had to do, and I remembered my conversation with my client about the free online tool he was using. I went to the company’s website and spent the next several hours watching tutorials and various videos of how the software worked. Unlike mail merge where you needed to use different document sets for different loan scenarios, the software permitted a user to start using conditions. For example, I could write a condition which stated that if there was no text entered into the “Guarantor” field, then the document stack should not produce the Guaranty. Better yet, it would modify the recitals in other documents to remove any reference to a Guarantor. While this may sound easy, it was in fact revolutionary. The software was dynamically changing sentence structures based on the conditions we were programming. We were beginning to build loan document automation software.

From 2015 to 2017 we pushed our first software to its limits. We hired outside consultants who would code our documents, started coding custom client conditions directly into the loan documents, and began to see the fruit of our labor. We were able to keep our prices down and were delivering work product that was fast and high quality.

Then, in 2018, I read a book called Tomorrow’s Lawyers by Andrew Susskind. The book discussed automation, artificial intelligence, machine learning, and a bunch of other buzzwords that I had heard but knew little about. The author’s basic premise was that the lawyers of tomorrow would only do three things: strategy, tactics, and negotiations. He also discussed how you should take most job tasks and then break them down into their most basic units and determine whether the task could be: (1) performed by software, (2) offshored to a non-attorney for almost no fee, (3) performed by a non-attorney due to lack of complexity, (4) performed by a remote attorney at a cheaper labor rate, or in the worst case scenario, (5) performed by an attorney on your payroll locally. He rightfully noted that clients would continue to push down fees and lawyers would need to only focus on tasks that require a high degree of skill: strategy, negotiation, and tactics. Anything repeatable would not be done by an attorney; better yet, anything repeatable would not be done by humans at all.

I then started to think about how these principles applied to my area of practice. To prepare a set of loan documents, I need to:

Up to this point, we had attorneys performing all six tasks above. We immediately hired several loan processors, purchased best in class automation software, and began furiously coding and re-engineering the way we practice law.

I looked at the task list above and started breaking down the time and expertise and stopped thinking about the preparation of loan documents as a single task which cost around $1,000. Instead, it was six distinct tasks and we needed to be able to offer our clients the ability to pick and choose which ones they wanted us to perform so they could control costs and purchase only what they wanted.

Today, we have built out a fully automated online loan documentation system called Lightning Docs. A client can go online, enter loan terms, and instantaneously receive the same loan documents that we would have produced by using the same automation we use in house. The deals can have multiple borrowers, multiple properties, prepayment penalties, interest holdbacks, impounds, complex entity structures, construction, membership pledges, collateral security agreements, and a myriad of other complex drafting features and yet be downloaded instantly. We offer this as a standalone service to our clients for as little as $200 per loan file. In 2022, the system generates almost 2000 loan files monthly and averages around $1,000,0000,000 in total loan amounts each month across a little over 100 clients nationally.

Now I spend most of my time focusing on advancing automation at the company. At any given time, I am working with numerous outside technical vendors including web developers, internal and external document coders, and workflow consultants to try to create a better loan document solution. We built a best in class nationwide online loan document solution that produces thousands of loan documents per month, and we’re not stopping anytime soon. But what about modifications, forbearances, loan sale agreements, and other loan-related agreements? What about private placements, litigation pleadings, and all other legal documents? If it’s repeatable, it’s automatable.

But what about you? Do you repeat any task daily? Do you manually update a Word document when issuing a Letter of Intent? Are you the only person who is technically trained to perform each and every task that you perform at work? If not, you may not realize it now, but you’re fighting for your survival as well. We are just scratching the surface of what software can produce and if you are not harnessing technology and breaking down every task into its basic units, you are on the wrong side of history.

Technology is great – it lets us perform tasks in less than an hour which used to take us 6-8 hours. But here’s the thing: someone with technical skills is looking at your job right now and figuring out how to do it cheaper, faster, and better.

Maybe Anthony wasn’t so crazy after all.

“At any given time, I am working with numerous outside technical vendors including web developers, internal and external document coders, and workflow consultants to try to create a better loan document solution. We built a best in class nationwide online loan document solution that produces thousands of loan documents per month, and we’re not stopping anytime soon.” 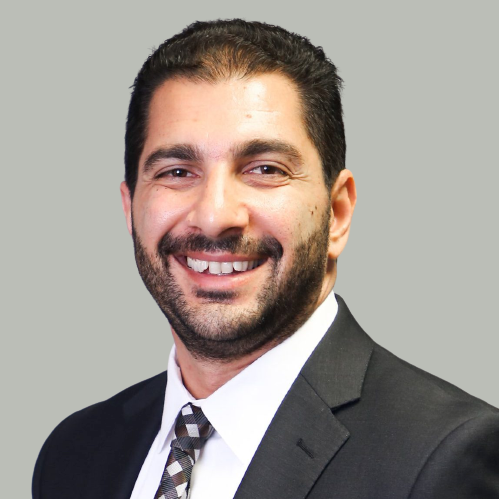 Nema Daghbandan is a Partner with Geraci LLP and the CEO of Lightning Docs. His practice revolves around the preparation of documents and providing compliance advice nationwide. He spends most of his days trying to figure out how to make loan documents cheaper, faster, and better.